In this edition of Brandler Bits we discuss the Promises of Change.

It is rather simple to make change, but much harder to keep change.  In this episode we discover what are the  ingredients that help us to maintain the changes we wish to make.  In addition, we address how the “12 Promises” can be utilized for long term happiness and change.

In this episode, we examine the most shameful of all addictions, sexual addiction. We will define addiction, identify how addiction impacts family members, and the addicted person. A case example is presented to highlight these issues

“…grant me the serenity to accept the things I cannot change…”

It’s getting close to one of my favorite times of the year–the start of baseball season.  In order to get ready for the upcoming season, it’s important to have a historical perspective.  As a die hard New York Yankee fan, I am going to commit a blasphemous act–I am going to discuss a legendary Boston Red Sox player.  Manny Ramirez was their left fielder for 8 years, and was probably one of the Sox’ most popular player.  He had a knack of saying the wrong things at the wrong time, losing track of the game, and generally being on his own planet.  Redsox fans described this as Manny being Manny.This  video describes many of these Manny being Manny moments:

In 2009 he was suspended 50 games for violating baseball’s drug policy by taking human chorionic gonadotropin (hCG), a women’s fertility drug.According to steroid dealer Victor Conte, hCG is often used to restart natural testosterone production after a steroid cycle.In the spring of 2011, Ramirez was informed by MLB of another violation to its drug policy, which could result in a 100-game suspension. He chose to retire on April 8 rather than face a 100-game suspension.

You would expect nothing different from Manny since he was a person who played by his own rules.  Although an exciting and charismatic player,  Manny was always being Manny.

In our daily lives, we are unlikely to find a Manny Ramirez.  We will however find people who are difficult to deal with.  When we encounter  these people, we  can  choose to either get upset or  accept them.  Let’s look at  these three vignettes, and answer the question that follows:

Paul Maxwell is a 60 year old  man who happens to be your father.  Paul has an interesting character trait.  He likes to flirt, and make advances on all of your friends.  (These women are in their 20’s) One of them has described his behavioral eloquently  as being “PaulMaxwelled”.  When Paul Maxwell is your dad you have several choices:

A) Arrange a hit on his life (not a great idea)

B) Kill him yourself(a worse idea)

Jenny Malone is your new boss.  Jenny is the company hotshot brought in from another state.  She is replacing your best friend who has left the company.  As a employee of the company for the past 10 years, you have given them your blood, sweat and tears.  Jenny decides to change all the things in the department that have worked for the 10 years that you’ve been there.  After massive frustration in dealing with Jenny you decide to:

A)  Punch her in the face(not a great idea)

B) March into the Vice-President’s office, shouting expletives, and describing in full detail her late hour escapades with other employees of the company(not a great idea)

Bobby and Janey Duncun  have been married for 5 years.  They have a child, Bobby, Jr who is  6years old.  Bobby Sr. drinks every day.  Sometimes while drunk, he has gotten angry with Janey and called her choice words .  Janey has tried to get Bobby to stop drinking.  She’s thrown out the alcohol, yelled and screamed at him for drinking, negotiated deals with him so that he wouldn’t drink.  She is angry and frustrated and feels unloved. At this point Janey’s best strategy is to:

a)    Continue to nag, scold, beg, cajole, scream in order to get him to stop drinking

When we encounter these people our best option is to ACCEPT them and their behavior.  In order to do that we need something that will help us–the serenity prayer: 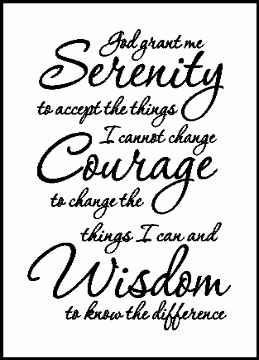 If we ACCEPT what we cannot change, which are all other people’s behavior, and change the things we can, which is our reactions to them, then we can have serenity.  3 sentences can give us all the change we need.  Use them regularly and you will feel better.

ESPN football analyst and former NFL player Robert Smith shares his story on alcoholism.
He is very candid and talks about the need to admit you have a problem and do whatever it takes to get sober.

Roger was also a recovering alcoholic who in August 2009 told his story about his recovery.  His blog should be titled “AA 101” because he tells about  how AA  works from his own perspective.  There are AA program related materials as well as you tube videos that accurately describe alcoholism and recovery in movies.

“The Beast and the Angel”

As the teenage leader of the popular 1960s Detroit band, The MC5, Wayne Kramer is a pioneer in America’s punk rock music scene. Rolling Stone magazine listed Kramer as one of the top 100 guitarists of all time. Kramer and The MC5 believed that the power of music could change the world, but personal issues and drug addictions tore the band apart, and their dream died.

In the mid-1970s, Kramer pled guilty to a cocaine-dealing charge and spent two years in federal prison. The Clash wrote a song about Kramer during this time called JAIL GUITAR DOORS. During this devastating time for him, Kramer turned to music to heal his anger and pain. When he was released, Kramer continued to play music and perform, and then he co-founded Jail Guitar Doors USA as a way to continue to heal his pain and rehabilitate prison inmates by allowing them to communicate in non-violent ways through music.

But this is a difficult journey for Kramer. As much as he wants to put aside his past, he knows that in order to achieve his goal of helping others like him, he must enter a place he never wanted to return to, and somehow use his skills and his pain to reach current inmates through music to help them heal.

Kramer must now fight with prison administrators for access and convince prisoners to trust him. If he succeeds, Kramer will take a path that combines music and tragedy to reach the goal he’s had since he was a teenager: to show how music can change world for the better—one inmate at a time.

Kramer talks about how he made this significant change in his life:

After all the power outages, gas lines, and uncertainties, a little humor is in order. Enjoy!!!